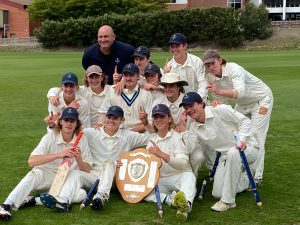 The following match report has been supplied by Peter Divenuto

In their return to SATIS Cricket for the first time since 2008, Guilford Young College has defeated Hutchins by 10 runs in a thrilling contest at the State Final at The Hutchins School. Both teams found themselves in excellent positions at different stages during their batting innings before disciplined partnership bowling efforts saw numerous wickets fall to the fielding team.

After a delayed start due to rain, Hutchins won the toss and invited GYC to bat. Three early wickets fell in the first dozen overs before steady rain saw the players leave the field with the home team well on top with GYC 3/23. Louis Smith was again impressive taking the first two GYC wickets on a wicket that was giving bowlers plenty of assistance. At tea, the umpires abandoned the days play, with players returning Saturday an hour early to make up for some lost time.

GYC started impressively on day two scoring at over 5 runs per over, predominately due to some over pitched bowling. Tom McGann (41) and Lachlan Borsboom (28) were doing the damage. Hutchins skipper Tom Willoughby bowled impressively (3/18 from 11 overs) and formed a great partnership initially with Zac Phair (0/10 from 8 overs) and then with Harry Jones (5/26 from 11.4 overs). Willoughby was the one to break the batting partnership, with McGann looking to attack by coming down the wicket, only to run past the ball with Max Denehey doing the rest behind the stumps, GYC 4/81. This was the first of 7 wickets to fall for just 21 runs, from 18 overs. Jones attacked the stumps and was rewarded for his pressure bowling as GYC collapsed to be all out for 102. It was tough going, but at the change of innings Hutchins were certainly on top.

A rejigged batting order from the Hutchins team saw some dangerous batsman slide down the order. James Scott and Zac Phair opened the batting and both batsmen looked comfortable before Lachlan Borsboom seamed a delivery away from Scott narrowly missing the outside edge and hitting the top of off stump. Hutchins 1/8. Chris Branch elevated to the number 3 position joined Phair at the crease and both players looked to blunt the GYC opening pair of Borsboom & Jack Willmott who were attacking the stumps and beating the outside edge, but with no luck. Borsboom got the breakthrough having the ball nip back to trap Branch in front for 2, the score now 2/22. Skipper Willoughby and Phair looked in total control when Borsboom struck again with only two balls remaining in his 8 over spell, having the dangerous Phair caught behind for 16. Up until this point, he had looked in total control and it was a bitter blow to the Hutchins team with the score now at 3/35.

Rhys Crennan (1/16 off 8 overs) entered the attack with immediate success, removing the new batsman Max Denehey caught by skipper Aiden Donovan at slip without scoring. State U/15 representative Louis Smith joined his captain at the wicket. The pair batted up until lunch and for the hour following it. There were a couple of shouts for lbw and a caught behind turned down however at the drinks break the score had moved on to 4/74. Hutchins required just 29 runs with approximately 51 overs remaining in the day.

Tight bowling from the GYC team and some excellent fielding restricted runs and built pressure, as the Hutchins innings started to mirror that of GYC team earlier in the day.

Left arm chinaman James Bourke (4/12 off 12 overs) entered the attack, replacing Crennan, and bowled superbly. Bowling in conjunction with Borsboom (4/25 off 16 overs) who returned for his second spell after his required rest period, the pair bowled with great discipline and skill. Wickets fell in clumps, 2 wickets with the score on 76, and 3 wickets with 91 on the board. The last of these wickets was the Hutchins captain and left-hand batsman Tom Willoughby, who on 42 looked to drive through the vacant cover region, only to find the outside edge the ball. Wicket-keeper Tom McGann did the rest, flying horizontal to his left, his arm fully extended, to take an absolute screamer. It was ‘the moment’ in the game and one that left Willoughby devastated after a superb 42 runs. It left his team with still 12 runs to win with just one wicket in hand. Borsboom had soon completed his superb and inspiring spell, and was replaced by Jack Willmott at the school end of the ground.

Willmott (1/22 off 8.5 overs) took the final wicket as Felix Charles edged the ball through to McGann, to this time be offered the simplest of catches and secure GYC the SATIS title. Emotion got the better of the GYC boys, with COVID-19 furthest from their minds, jumping all over one another in celebration in a dramatic win. The last 6 wickets had fallen for just 16 runs in over an hours play.

Well done to the curators at the Hutchins School who worked tirelessly to ensure there was a match played after the rain impacted as it did. Thank you to parents and catering staff at both schools who shared the hosting duties with each school hosting one day. This was a smart and logical move, given there were two southern teams competing.

While the scores do not reflect the standard of the game, it certainly demonstrated the closeness of the two teams. It was tough and hard cricket for all of the 90+ overs the game lasted. Hutchins with only four Year 12’s in the side will be back to fight another day, while we all hope that GYC maintains its presence in the competition.