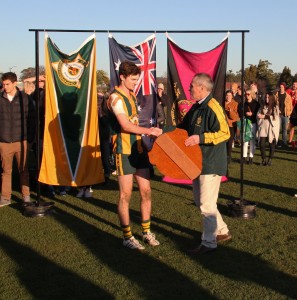 Following are the football reports from the Senior Firsts and Seconds Football Finals played on Saturday 20th June at St Patrick’s College.  Congratulations to the St Patrick’s College team on their efforts in winning the Firsts Flag for five years in a row and also to the Scotch Oakburn College Team who won the Seconds Flag.  Both teams defeated The Hutchins School.  Thank you for the following match reports that were provided by the winning schools.

The build up to the big day was fantastic with the boys having two positive and high intensity training sessions before organizing a dinner together Friday night. On Saturday the day began with the usual strapping, mucking around and team meeting however this time the butterflies were frantically flying around the basket. The game plan was clear and the boys were ready to go into battle.

The first half was a tightly fought contest with only 7 points in St Patrick’s favour separating the two sides.  St Patrick’s had more of the ball in the first half however strong defensive set ups by Hutchins behind each stoppage allowed them to rebound the ball on numerous occasions. The second half saw the fitness level of St Patrick’s exceed their bigger bodied opponents and run out the game 31 point victors.

Luke Tucker was outstanding in the ruck and around the ground and took Best on Ground honours.  The impact he made when moved into the ruck from centre half back was the catalyst that sparked the boys into gear.  Curtis Murfett was once again at the bottom of every pack and involved in most passages of play, working tirelessly until the final siren blew.  His work rate and desire to compete is nothing short of amazing.  Callum Walker was a focal point up forward providing a strong target all day.  His willingness to hit packs hard is great to see and for his efforts he finished with 3 goals along with fellow forward Dylan Jones.  Adam Linford and Dom Shegog both played their best games for the school having huge influences in the midfield and defence respectfully. Each and every player impacted the game at different times and all played vital roles in the overall team success. It takes the relentless efforts of 22 players to win a grand final and that’s exactly what occurred. 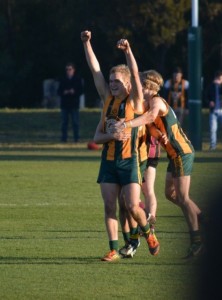 The Scotch Oakburn College Seconds Football team played the SATIS Final against The Hutchins School on Saturday 20 June. The players were full of confidence coming into the contest having beaten the defending champions, The Hutchins School during the regular season and remaining undefeated. The Hutchins School challenged Scotch Oakburn throughout the course of the game, however they were unable to convert into pressure on the scoreboard. As a result, Scotch Oakburn were able to control the game leading Hutchins at every break and only getting stronger as the game wore on. In the end Scotch Oakburn were too strong for Hutchins only allowing them two minor scoring shots for the entire game, running out eventual winners 15-20-110 to Hutchins 0-2-2, a 108-point victory and winning the Seconds Football State trophy that the College last won in 2013.