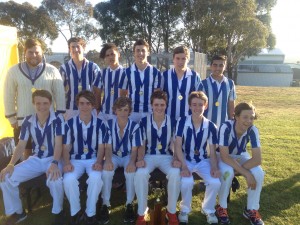 On Wednesday the 28th of October the 9/10 Grammar T20 Cricket team travelled to Brooks to play in the second year of the annual Captain’s Cup match between the two schools. The annual game is played in recognition of the two Tasmanian born greats in George Bailey (LCGS) and Ricky Ponting (BHS) going on to captain the country. The game was played in a fair and competitive manner with both sides doing everything that they could to win the cup.

With Grammar winning the toss and batting first the last thing they wanted was to lose early wickets. This was the case with Grammar slumping to 4/36 after 9 overs. Thanks to a match saving partnership of 54 between Charles Curran (22) and Dominic Rawlings (24) grammar made it to a defendable score of 101. Corey Cochrane was the standout bowler for Brooks with 4/17.

Brooks didn’t get an ideal start losing a wicket in the first over of their run chase. Brooks struggled to create partnerships in their innings as Grammar were taking consistent wickets throughout. Brooks’ top scorer Joel (17) helped them get to 81 from their 20 overs. A standout bowling performance of 2/5 from Grammar’s Harrison Banks ensured Grammar win the Captain’s Cup for the first time.

It was a privilege to play in this game to recognise the achievements of George Bailey and Ricky Ponting. Each individual Grammar Player was presented with a medal from Ricky’s Dad Graeme. Ricky Ponting’s parents Graeme and Lorraine were spectators of the game on behalf of Ricky.

The game was played in good spirits throughout and we look forward to it again next year.