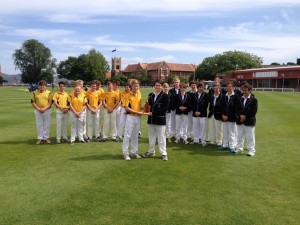 The match was played in great spirits with the Brooks team winning by 7 runs.

The Ponting medal was awarded to the Captain of Brooks who led with the bat making 38 off 34 deliveries. The Bailey medal awarded to the best Launceston Grammar, Dominic Rawlings, who bowled exceptionally well with 4/6.

Thank you to Graham and Lorraine Ponting for their attendance.